Dylan Yates, president of the Cape Breton Environmental Association (CBEA), isn’t surprised that the documentary Seaspiracy is trending on Netflix; since 2017 he and his team of members and volunteers have removed more than 400 lobster traps and thousands of pounds of rope and other forms of marine debris from the shoreline in Eastern Cape Breton. In fact, they’ve been working on their own documentary about it — you can watch the trailer on YouTube.

“Abandoned and lost fishing gear is a major issue throughout Atlantic Canada,” says the Natural Resource Environmental Technology grad. “The general public is just starting to realize that, due in part to cleanup groups taking action and the media coverage on the Right Whales.”

Fortunately, Dylan says there’s growing support for initiatives and organizations, like his, that are fighting back against the growing amount of ghost gear and plastic debris threatening marine life, underwater and nearshore habitats and coastal species of birds, turtles and other animals.

“It’s time we looked at the bigger picture,” he says. “The land does not belong to us. We belong to the land. Instead of looking at the natural world as just a resource, we need to work to conserve it. We do this by practicing sustainability in all aspects of our lives.”

While still a student at Strait Area Campus, Dylan says a desire to make a difference and bring awareness to illegal dumping in Cape Breton using Facebook became the starting point for the CBEA.

“I obviously spend a lot of time outdoors,” he says. “I used to upload photos of illegal dumpsites that I came across and it really took off. Before I knew it, I was doing interviews with local media. I had people messaging me daily to report dumpsites. It was a full-time job just keeping up with everything.”

He says it was clear what he had to do, “After finishing up my program, I knew I had to help put an end to the problem.”

After completing his course work, and with just one month left before officially receiving his diploma, Dylan planned and hosted the first community cleanup under the CBEA name in his hometown of Glace Bay.

“I wanted to make a difference in my community, and it gained a following quicker than I could have imagined,” he says of the 2017 event that welcomed 20 volunteers and removed nearly 30 bags of trash from the environment.

“The program at NSCC was broad,” says Dylan. “I did my research when I applied. It was clear I’d be spending a good amount of time in the field, and the program didn’t focus on one specific aspect of environmental sciences. It gave me a hands-on approach and the skills to pursue a career in environmental sciences that you really can’t get elsewhere.”

Along with the abilities he honed in the field, Dylan also gained insights that continue to serve him well today.

“In my line of work, I could be in the woods one day and on the shoreline the next. Understanding how human actions can negatively affect our environment is incredibly important. NSCC provided me with that.”

In 2019, Dylan took advantage of an articulation agreement between NSCC and Cape Breton University to gain advanced standing in CBU’s Bachelor of Engineering Technology program. In just one additional year, he completed his degree while also building the CBEA into a board-governed organization.

That same year, DivertNS presented Dylan with the Mobius Award for Emerging Environmental Leaders for his impressive work. When presenting him with the award, they noted, “Dylan is a champion of environmental preservation. He is a lead-by-example individual, tirelessly volunteering to remove litter and marine debris from Cape Breton waterways and collecting accurate data while doing it.”

During Earth Week 2021, Dylan and the CBEA will also receive the 2020 Minister's Award of Excellence from the Honourable Keith Colwell, Nova Scotia’s Minister of Fisheries and Aquaculture, for difference-making work in addressing marine debris.

You can learn more about Dylan and his award-winning work on DivertNS’s YouTube channel. 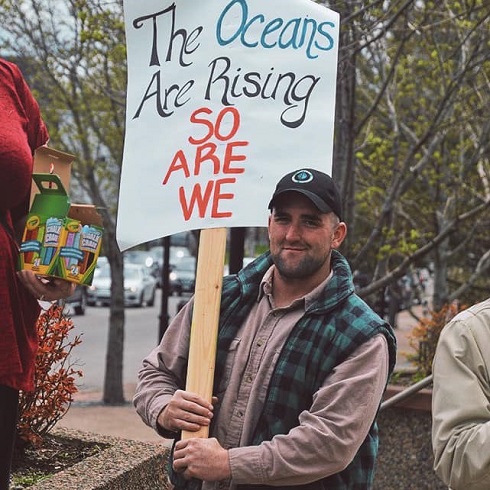 "The land does not belong to us. We belong to the land. We are one, intertwined, not separate. We owe everything we are to the natural world around us."
Dylan Yates
President, Cape Breton Environmental Association
Natural Resources Environmental Technology Class of 2017 (Photo credit: Paul Strome)
Was this page helpful?
Your feedback will help improve this website
Yes No
Your feedback will help improve this website
For comments or questions that require a response, please use our Contact NSCC form.
Remaining characters: 500
Thank you for your feedback.
Back to top