Investments in NSCC have positive impact in communities province-wide 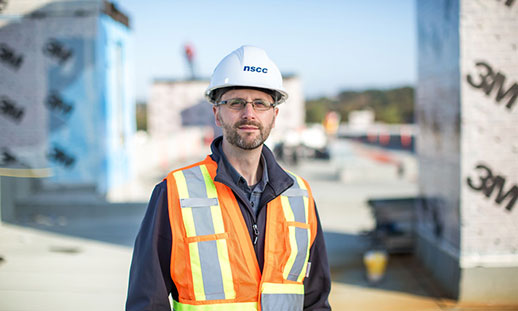 Every time John Hamm drives by the Pictou campus of the Nova Scotia Community College—something he does several times each week—he feels a sense of pride that he helped to maintain that campus and to develop the College as we know it today.

It was during his premiership that the province announced a landmark investment of $123 million in the College. That investment enabled the College to modernize its existing facilities, such as the Pictou campus, and build the state-of-the-art Ivany campus, resulting in enhanced capacity and programming for learners. “It was not difficult to justify that investment,” he says. “By maintaining and enhancing the network of campuses already in place, the College could continue to deliver skills training throughout the province, and that would have a positive impact on all of our communities.”

More investments have followed since then. Each one has helped the College advance its mission to deliver training that makes it possible for all Nova Scotians to succeed and have a positive impact on our quality of life. Campuses have become more accessible, more sustainable, and more advanced, with innovative undertakings such as the Centre for Ocean Ventures and Entrepreneurship (COVE), which is helping to grow the province’s ocean economy.

“It is important to us to maintain our network of campuses so that everyone across the province has access to postsecondary education,” says Brian Fancy, Manager of Capital Development and Renewal. “At the same time, our goal with our infrastructure is to ensure each campus has a unique identity that reflects the different communities we serve.”

Meeting all these goals is often challenging, given that there is approximately three million square feet of building space requiring maintenance and support each year. But the College continues to attract national and international recognition for its efforts, specifically its commitment to sustainability. It has earned a STARS Gold Rating, Boma Best Certification, a 2021 Gold Excellence in Sustainable Development Award from Colleges and Institutes Canada and the Princeton Review 2021 Green Honor Roll ranking.

Inspired in part by these accomplishments, the College is taking steps to create new infrastructure that will not only ensure its future success but also that of all Nova Scotians. In September 2021, two new campus housing facilities opened at the Strait Area and Annapolis Valley campuses and three more are being planned for Akerley, Ivany, and Pictou campuses. In 2024, the new Marconi campus will open in downtown Sydney. And there are plans to enhance accessibility, move toward net-zero buildings, and create more vibrant communal spaces that provide for the health and social well-being of all learners.

“It has been exciting to see how our campuses have evolved into these dynamic environments where people are excited to learn and work,” Brian says. “We want to build on that so that we continue to meet everyone’s needs for years to come.”