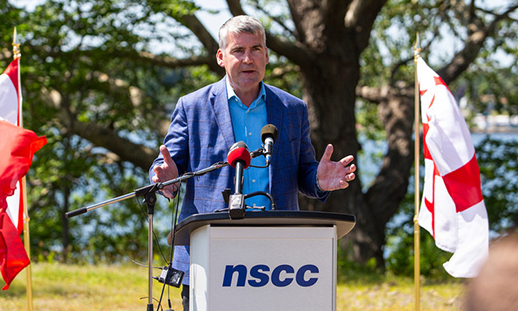 Former Premier, Stephan MacNeil, at the announcement of a new Marconi campus located on the Sydney Waterfront.

When Stephen McNeil was premier of Nova Scotia, he often told NSCC students that if their chosen trade ever lost its appeal, they could always run for premier.

Although said in humour, it was his way of telling students that anything was possible for them, and they could use the skills and confidence they gained at the College to have a major impact in the community just as he and thousands of other alumni have. “I think the College has been transformational,” he says. “As our old vocational school system evolved into the College we know today, it began to transform Nova Scotia’s economy and quality of life. And it continues to do that by giving learners affordable access to the higher education that enables them to gain employment, lead companies and do so many extraordinary things.”

It is not hard to find evidence of alumni doing extraordinary things. Approximately 92% of all graduates live and work in Nova Scotia, 88% of them are employed, and all of them are strengthening our communities, industries and economy. For example, graduates have helped establish Nova Scotia as a leader in industries such as , information technology, geographic information systems, and food and beverage, as well as lucrative emerging sectors such as ocean technology, gaming and viticulture. And they are applying their knowledge and skills in a wide range of companies, institutions and positions, including Nova Scotia Health, RedSpace, Stantec, Department of National Defence, Halifax Water, Shannex, IBM, Irving Shipbuilding and the College itself – to name a few examples.

“Community is in our name, and our grads leave with the education and skills they need to build successful and rewarding careers,” says Ashley Power, Manager of Alumni Relations at the College. “Through service learning, portfolio learning, client-based work and embedded volunteering they also leave with an awareness of and a connection to the communities we live in and serve, and a desire to make a difference. And as part of the alumni network, they continue to connect, give back and make their mark in Nova Scotia.”

The College is ensuring that alumni continue to have an impact by engaging industries and communities to identify the major economic and societal challenges they want to address. “We are looking at issues such as climate change, improving Indigenous and African Nova Scotian access to training, and post-pandemic economic resilience to see how we can combine our resources with those of our partners to have a significant impact in these areas,” says Michelle Bussey, Executive Director of the NSCC Foundation and Alumni Relations. “But in doing so, we continue to base our activities on our mission of setting each student up for success. When we do that, our communities thrive as well.”

That ability to adapt and continually contribute to positive change for Nova Scotia’s learners, communities and industries is a source of pride for alumni like Stephen McNeil. “The College has been flexible and nimble in creating programs that strengthen our economy and the ability of its learners to succeed,” he says. “I see the potential for it to do so much more and I continue to cheer the College on in its efforts to give all Nova Scotians a brighter future.”