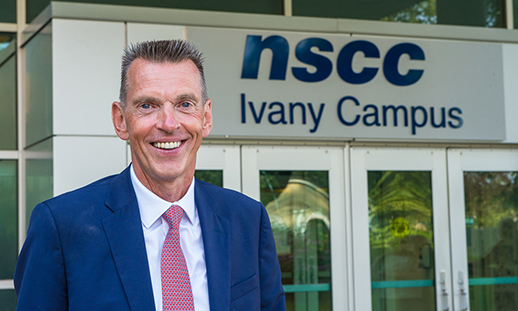 Ray Ivany, former NSCC President, at the renaming of the Waterfront Campus to Ivany Campus in honour of his significant contributions.

When the Nova Scotia Government proclaimed the Community Colleges Act in April 1996, a new era began not only for Nova Scotia’s vocational schools but also the province. The Act brought those schools together to create Nova Scotia Community College (NSCC) as we know it, with an independent, dedicated board of governors to steer its future and a mission to build Nova Scotia’s economy and quality of life through education and innovation. But NSCC faced a significant challenge: how to become a modern College capable of achieving that goal.

“We needed to create a college system that could compete with any college nationwide and do it as quickly as possible,” recalls Ray Ivany, who served as NSCC’s president from 1998 until 2005. “It was a leapfrog approach in which we drew on the advances that Canada’s college system had made and then advanced it by a generation. Given what we asked of our faculty, staff, and students, and the speed we were moving, it could have gone wrong, but the way everyone rallied to meet this challenge was one of the most extraordinary experiences of my career.”

According to Ray, a key factor in the success of that push to innovate was NSCC’s board of governors—a group of community leaders who stepped up and established a culture of outstanding governance and decision-making that continues to this day. “We adopted an approach that was rare in that we decided to always speak to the reality of the situation instead of putting the best face on it,” he explains. “But more than that, the board took the approach that it was there to solve issues for all Nova Scotians and the whole province.”

Through that approach, the board not only helped build new infrastructure and introduced new programming focused on the needs of Nova Scotia’s learners and businesses but also began to build NSCC’s reputation as a recognized, relevant, and respected postsecondary institution. As a result, more learners enrolled in the College’s programs and more industry experts joined as faculty. “A big part of the growth we experienced was the result of having a governance model that the public and our employees could trust,” explains Don Bureaux, NSCC President. “We doubled our staff, programming, enrolment, and our footprint. It really felt as if our ship had come in.”

Now, Don says a new era is beginning for NSCC, one of embracing concepts such as big data, biosciences, and robotics. That means more innovation and growth at the College to ensure that Nova Scotians not only have the skills to succeed in the face of this revolution but also lead it. He says the board is ready to take on that challenge, in part because its approach to governance is evolving.

“Good governance comes alive in three different ways—oversight, insight, and foresight,” Don explains. “Traditionally, our board focused most of its energy on oversight to ensure that NSCC was following best practices and procedures. The goal now is to focus its energy on providing insight and foresight to adapt to a new reality of constant fast forward. That will make NSCC top of class not just in Canada but also the world, and it will make us a beacon of economic and social prosperity for generations to come.”