COVID-19 Updates
We've changed how programs will be delivered this 20-21 academic year to ensure we can safely deliver the high-quality education you expect. Learn more about program delivery changes 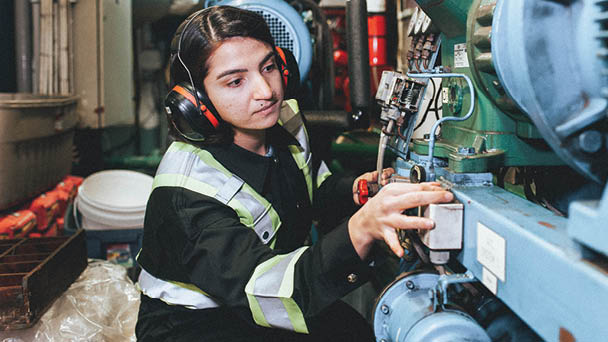 Joan Godsey, a Culinary Management student at Kingstec Campus, is preparing meals for long haul truck drivers who are struggling to dine on the road due to COVID-19.

NSCC grad Hyesun Kwon was driven to start a new life in Canada for the sake of her daughter. That same drive has helped her rediscover her love of cartooning and restart her career as an animator.

Important Dates & Events
View all dates
NSCC in the news

(The Coast) Coeur Clothing’s unisex designs put Pride front and centre With a graphic design degree from NSCC in her back pocket, Anisa Francoeur has always been a creator with an interest in fashion.

(Cape Breton Post) Brett Matthews sounds a bit in awe of how his music career has unfolded since May 2019. That’s when award-winning rapper Classified (Luke Boyd) made a post on Facebook that changed his life.

(Chronicle Herald) Construction to begin this month on new Nova Scotia Community College on Sydney waterfront A glimpse into the future of Sydney's downtown core was unveiled on Friday when the provincial government unveiled conceptual drawings of the new Marconi Campus.

(Irving Shipbuilding) The first-ever Pathways to Shipbuilding Program for African Nova Scotians concluded today at Halifax Shipyard where students had been working on their final practical training in the two-year welding program.

NSCC to shift many fall courses online because of COVID-19

(CBC Nova Scotia) NSCC to shift many fall courses online because of COVID-19 Nova Scotia Community College said it's moving many of its courses online in the fall with some trades students and instructors meeting on campus, possibly with protective equipment, as part of the new COVID-19 reality.

Representatives from post-secondary schools highlight accessibility for students with disabilities

(Global News) Representatives from post-secondary institutions are taking part in a panel discussion on campus accessibility as part of the National AccessAbility Week Digital Conference, hosted by Halifax-based organization reachAbility.

(Irving Shipbuilding) Nineteen students participating in the two-year Pathways to Shipbuilding Program for African Nova Scotians who were just weeks away from completing their Welding Diploma program from Nova Scotia Community College when Covid-19 disrupted studies and schedules have been able to resume program thanks to a sponsorship by Irving Shipbuilding and continued support from our key community partners; East Preston Empowerment Academy, the YMCA, Employment Nova Scotia, NSAA and CWB.

(Chronicle Herald) NSCC Chef Claude Aucoin has no children of his own. But he is from a large Cheticamp family, and, at 58, has already mourned the loss of not just his parents, but two brothers.

(Chronicle Herald) The new principal of the Strait Area Campus brings an extensive background in the marine industry as well as post-secondary experience to his new post. The Nova Scotia Community College recently named Vivek Saxena as the new principal at the Port Hawkesbury campus.

Creativity the key to NSCC Marconi campus response to coronavirus

(Cape Breton Post) Creativity the key to NSCC Marconi campus response to coronavirus Fred Tilley, principal of the Nova Scotia Community College’s Marconi campus, said staff and students at the post-secondary institution are using creativity and co-operation to make the best of a bad time as the school’s campus remains closed during the ongoing COVID-related state of emergency.

(101.5 The Hawk) The NSCC Strait Area Campus has named their new principal, Vivek Saxena. A release Monday said Saxena lead the Nautical Institute team at the campus for the last seven years.

Sea levels rising faster in the Maritimes, but science can help communities plan and prepare

(CBC Nova Scotia) Sea levels rising faster in the Maritimes, but science can help communities plan and prepare Tim Webster, a research scientist with the Applied Geomatics Research Group at Nova Scotia Community College, has helped model what sea level rise could look like in the province.
Campuses & Locations